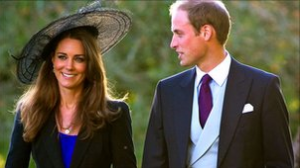 The royal wedding of Prince William and Kate Middleton will feature two cakes.

The official one will be a traditional multi-tiered fruit cake made by Leicestershire baker Fiona Cairns.

Miss Middleton has asked for it to be decorated with edible flowers – an English rose, a Scottish thistle, a Welsh daffodil and an Irish shamrock.

There will also be a family childhood favourite of the prince's – an unbaked chocolate biscuit cake by McVitie's made to a secret Royal Family recipe.

Ms Cairns's cake will be a focal point of the couple's Buckingham Palace reception which follows the wedding at Westminster Abbey on 29 April.

The cake will feature William and Kate's new cipher – thought to feature the couple's entwined initials – which will be officially released on their wedding day on 29 April.

Having received the commission to make the cake, Ms Cairns, 56, said: "I couldn't believe it, I'm very excited, very daunted and very privileged – a mixture of emotions.

"It's multi-tiered, doesn't have colour – it's cream and white (icing) – and it's a traditional cake but also quite delicate and modern, all the tiers will have a different theme."

She said of Miss Middleton's input: "She has guided us right from the beginning and has quite strong ideas.

"She knew very much what she wanted and she brought us mood boards and told us what influences she would like us to use on the cake."

The ingredients will include dried fruits such as raisins and sultanas, walnuts, cherries, grated oranges and lemon, French brandy, free range eggs and flour.

"These are many of the ingredients we will be using in the cake, I can't tell you exactly the recipe, but the brandy is very important, we always soak our fruits overnight to plump up the fruits," Ms Cairns said.

McVitie's will make the prince's confection with dark chocolate and crushed Rich Tea biscuits, according to a Royal Family recipe.

However, Paul Courtney of McVitie's, who is making the second cake, was guarded about exactly what that entailed.

He said: "I'd love to be able to tell you, I really would. However, it's a royal secret. The recipe was given to us by the Palace and we've been sworn to secrecy."

Written By
Marta
More from Marta
I found these beauties in Health Magazine. They were called out...
Read More

About Bakers and Artists

From large purveyors to small independently owned ones. A global search for beautifully crafted desserts, party ideas, products, packaging, flavor profiles, trends and the most unique items in the world - wrapped with personal travel favorites and personal photography.

We are Savory and Sweet!

This error message is only visible to WordPress admins

Please go to the Instagram Feed settings page to create a feed.