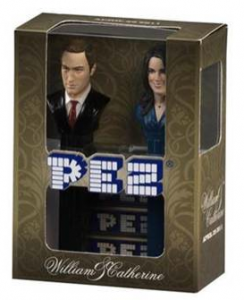 VIENNA — If you've ever wanted to eat sweets disgorged from the chests of royalty, your time has come.

PEZ, the Austrian company whose candy dispensers are known around the world, has created a special pair in the likeness of Britain's Prince William and his fiancee Kate Middleton ahead of next month's royal wedding.

Fans of the royal couple or of PEZ figurines can submit offers on the eBay for charity auction platform from April 7 to 17. Proceeds will go to a charity supported by the couple, the company said on Tuesday.

PEZ makes around 80 million dispensers and 4.6 billion sweets a year, but unlike other popular models the William and Kate figurines will not dispense sweets through their mouths.

"The whole head bends back," the spokeswoman said.

The smiling figure of Kate wears blue while William dresses in black with a red tie.

"The figure of Prince William has a lot more hair than in real life," the spokeswoman said.

About Bakers and Artists

From large purveyors to small independently owned ones. A global search for beautifully crafted desserts, party ideas, products, packaging, flavor profiles, trends and the most unique items in the world - wrapped with personal travel favorites and personal photography.

We are Savory and Sweet!

This error message is only visible to WordPress admins

Please go to the Instagram Feed settings page to create a feed.